Or should I say “Hoppy” Western Maine breweries?

The local brew scene in Western Maine has experienced great growth in the past few years. Just in the six years my wife and I have owned the Wolf Cove Inn, a bed and breakfast in Maine, we’ve seen four of the six tasting rooms and brew pubs listed below come online. We now have a legit Western Maine Breweries Beer Trail right in our back yard. In fact, if you were to hop in the car and just drive from the eastern-most to the western-most brewery non-stop, it would only take you about 45 minutes. So hitting a bunch of these gems in one day is quite doable.

One day recently, I convened some of our staff and challenged (challenged I tell you) them to tell me about the goods on our local beer trail. Like the dedicated folks they are, they heartily took to the task at hand. Photos and comments about each location are courtesy of your hard working, investigative Wolf Cove Inn staff.

The first two establishments (Oxbow Beer Garden and Norway Brewing Company) are west of the Wolf Cove Inn, and the other four (Side By Each, Gritty’s, Bear Bones and Baxter Brewing) are to the east. You can tackle the beer trail a number of ways:

Keep in mind that four of the six places open 3ish. Side By Each opens at 7 but doesn’t begin pouring until 11. Gritty’s opens at 11. 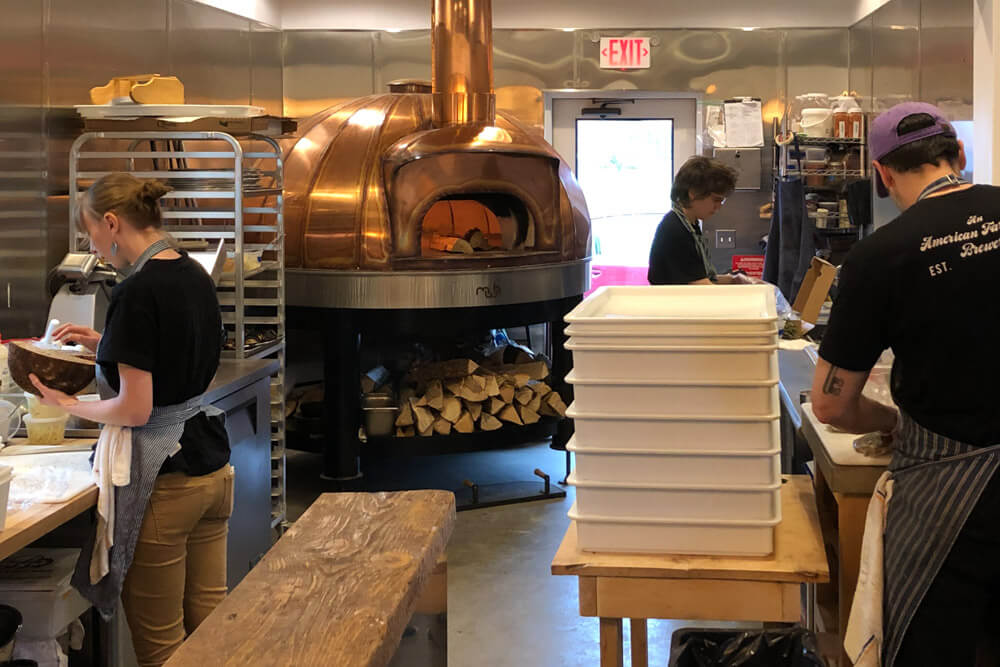 A recent addition to the Maine Breweries scene, the folks at Oxbow in Oxford renovated a 200 year old barn into a restaurant and taproom. They did a really nice job on it! Also on-site, a small tasting room features fermentation space used to produce blends for the restaurant.

The beer on tap at the Oxbow Beer Garden is brewed at the main Oxbow Brewery in Newcastle. Oxbow focuses on European influenced farmhouse ales. Brewing water consists of soft spring water originating from an artesian well adjacent to the brewery.

In addition to beer, the restaurant, featuring a wood-fired oven, serves up sourdough pizza as well as seasonal produce and meats.

Roy’s tasting and dining report: “Wow, they did a great job remodeling a rustic Maine barn into an inviting brew pub. I tried a bunch of beers, but my favorite was the Infinite Darkness Imperial Stout (sounds like something Tyrion from Game of Thrones would drink.) They have a nice casual dining menu with lots of unique offerings, including Wood-fired Ramps and Wood-roasted Fish Collar. Sue and I really enjoyed the Sunflower Seed Pesto Pizza with Coppa and Fresh Pea Shoots.

“What’s really cool is that they have an on-staff farmer. We enjoyed talking with her (Lauren) a-lot. They have big plans for converting some of the open space out back from the former Carter’s cross-country touring center into farmland (note that you will still be able to ski at the touring center in the winter). They’ll use their home-grown harvest to provide farm-to-table ingredients for the restaurant. They just opened a few months ago, and this is their first summer season, so I expect to see this place evolve quite nicely. The Oxford Beer Garden has excellent bones.” 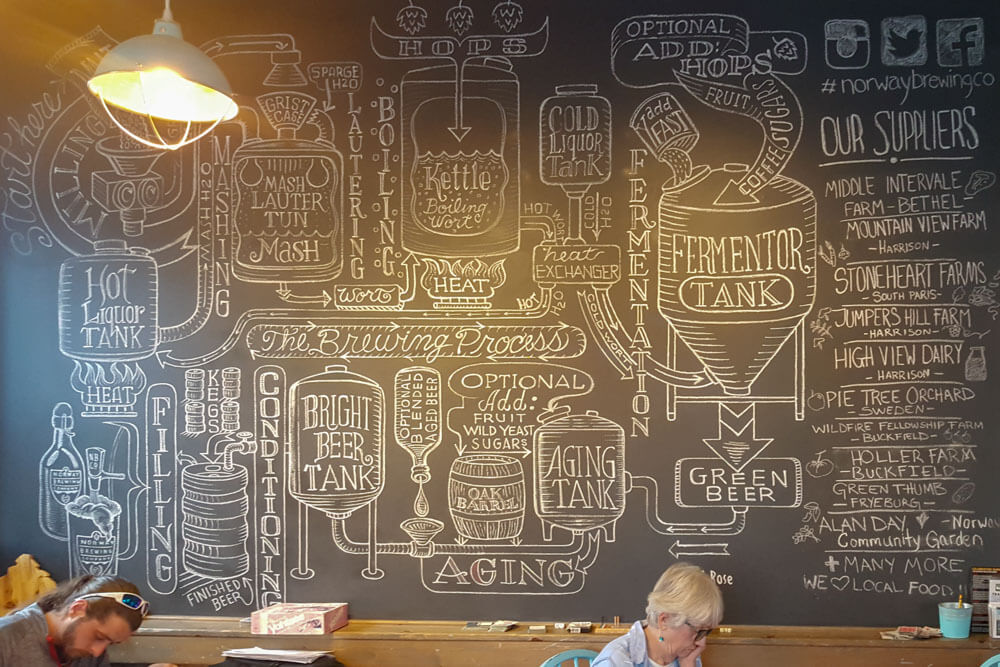 How They Make Beer At Norway Brewing

The folks at Norway Brewing are committed to the farm to table concept of knowing where your food and ingredients come from. Their goal is to use as many locally sourced ingredients as possible. To that end, they’ve established an extensive network of local farmers, growers as well as grain and hop growers to provide the raw ingredients for their brews and the food they serve.

A couple of my favorite brews are the Green Machine, a seasonal ale, and Mr. Grumpy Pants (my daughter thinks this quite apropos), an oatmeal stout with coffee.

AJ’s report: “Loved the beer flight – especially the Berliner and the Impersonater. Media Noche sandwich was good – I really enjoyed the pickled vegetables on there. We enjoyed playing Mancala while waiting for the food. They also have Cards Against Humanity, Trivial Pursuit and a few other games. They had a nice country style farmhouse feel. In addition they have an outdoor patio area to enjoy on nice days.”

3) Side By Each Brewing Company

Another recent addition to the Maine Breweries scene, Side By Each operates a small brewery with a large tasting room. Although a new brew pub, the owners have some good beer-making DNA. Ben was the Director of Brewing Operations and Matt the Head Brewer at Baxter Brewing Company in Lewiston.

Something cool about the place? If you find something you like from their frequently changing 12 taps, they’ll happily fill growlers and mini-kegs to go.

In addition, you can grab some grub there. Pinky D’s Poutine Factory, with their kitchen right inside the space, offers lunch and dinner. Pinky’s has recently won Maine’s Food Truck of the Year award. Insider’s scoop – if you ski at Sugarloaf Mountain in the winter, you’ll see Pinky’s food truck right there at the base lodge.

Roy’s report: “Nice ambiance. Matt and Ben, the owners, are right there pouring your brews. They have a nice sampler size (2.5 ounces) for their flights (you pick 4). So when done sampling, you have plenty of room to get a full size pour of your favorite. The Team Player Pre Prohibition Lager was my favorite, followed closely by the Maillards Revenge Coffee Porter. What’s really cool is the Maine Poutine kitchen on site. We had some terrific Poutine (my college roommate calls Poutine “the perfect food”) and Wings to go along with our brews. Check Side By Each’s website for their entertainment offerings. They offer comedy nights, trivia and live music starting later in the afternoon.” 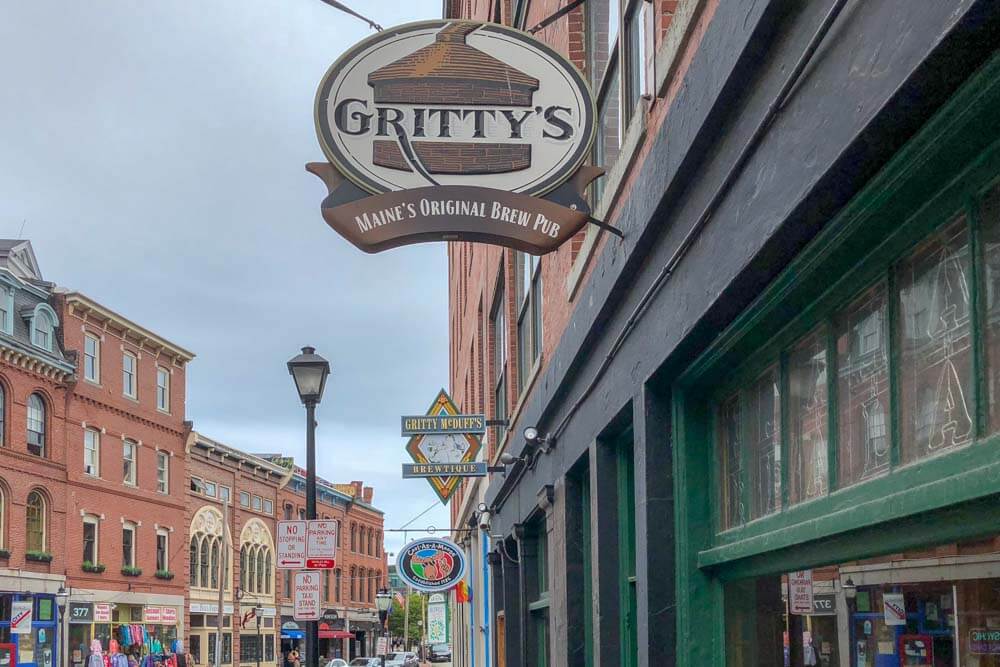 Gritty’s Brew Pub sits on the banks of the Androscoggin River in downtown Auburn. There you’ll enjoy a smorgasbord of fine, handcrafted ales and traditional pub fare.

Gritty’s began brewing in 1988 at Portland’s Old Port. Since then, they’ve become the brew pub of choice for Mainer’s and folks “from away” (that would be folks who aren’t from Maine – it’s one of those quaint Maine phrases!) Over the years, Gritty’s has pulled in an impressive haul of awards, including “Maine’s Best Brew Pub”, “Best Maine Microbrew” and “Best Bar”.

Roy’s report: “Nice selection of beer on tap. I’m partial to darker, beefier beers. I enjoyed the Black Fly Stout and the Scottish Ale. Sue, being a lighter, fruitier beer type, enjoyed the Raspberry Wheat beer. Gritty’s has an extensive pub fare menu with something for everyone. Be sure to get outdoor seating. The Androscoggin River is right there and provides a nice backdrop while sampling the brews and enjoying your meal.” 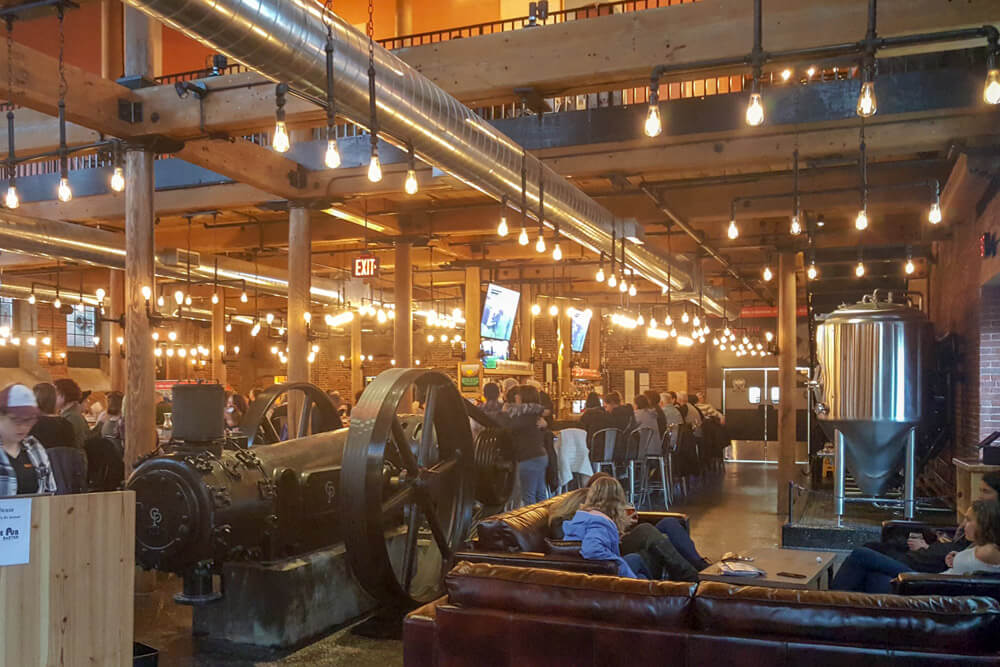 The New Pub At Baxter Brewing

Baxter Brewing is a local, Maine brewery success story. It’s one of the most established of the Maine Breweries on the Western Maine Beer Trail. Founded in 2010 in a renovated 150 year old mill, Baxter’s brewing ethic symbolize the grit, determination and passion of the weavers and millwrights who occupied the mill oh so many years ago. Furthermore, when you find their product in the local markets, it’s in cans. Yes, cans. The folks at Baxter know cans are sustainable, they swear the beer tastes better and, well, a can doesn’t require an opener!

The on-site Pub runs a happy hour 3-6 Tue-Thu and all day Sunday. It features delicious food and 20 taps, giving you a wide variety of the goods to choose from, along with appetizers, soups, salads and sandwiches.

AJ’s report from her recon run – “The Pub at Baxter – classic yet modern mill atmosphere, very casual, event space upstairs. Menu is fantastic. Really enjoyed the Einstein Ale. The Reuben sandwich was fantastic! On a side note, be sure to say hi to AJ’s friend Stan if you see him (he’s got the blonde Mohawk – been with Baxter forever!) He’s super friendly and will take great care of you!!)” 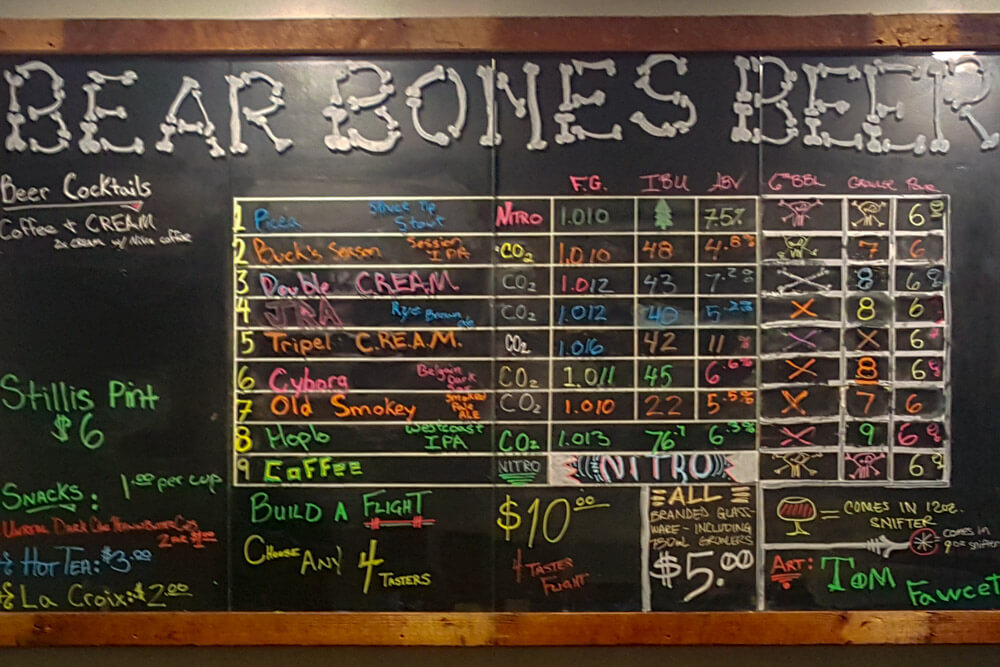 On Tap At Bear Bones

These folks are small and unique, the smallest of the Maine breweries on the Western Maine Beer Trail. So small, in fact, that rather than calling themselves a micro-brewery, they opt for nano-brewery instead. At Bear Bones, you’ll sample high quality, sustainable craft beer.

AJ was once again on the job. Here’s her report: “Bear Bones Brewery Tasting Room – very laidback, casual atmosphere. Awesome for adventurous beer drinkers. Brews are unique and change frequently. They had a great acoustic band playing classic favorites & crowd requests. I had their current sour beer, Stillis – tasted light and refreshing with notes of grapefruit. They do lots of different stuff – smoked pineapple sour was the last one they had on tap. They’ve also done a smoked IPA. Owner/Bartender Adam was extremely knowledgeable and helped me find the perfect beverage based on a quick description of what I usually like (light, fruity, sours.) He even let me try a few before making a selection.” 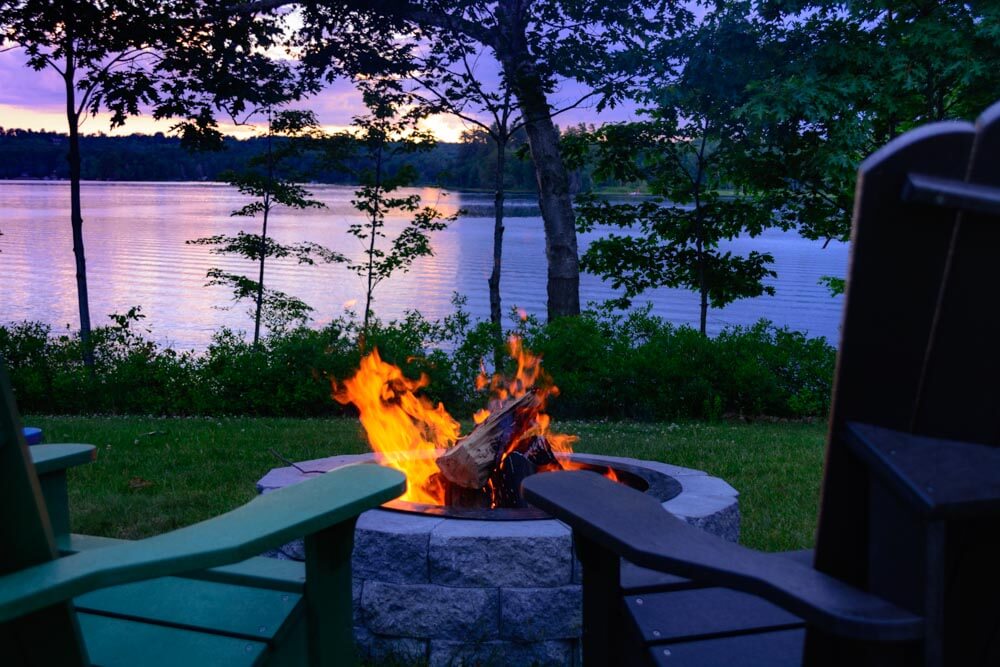 Make A Weekend (or a Week) Of Visiting Maine Breweries

Or take even more time and make a week of it! The Wolf Cove Inn, a Maine B&B, is the perfect spot to call your home base while exploring the Maine breweries on the Western Maine Beer Trail. The nearest brew pub is only seven minutes away and the furthest is twenty-five minutes away. With lots to do during the day until some of the breweries and pubs open, you’ll have a chance to work off some of those beer calories. We offer complimentary kayaks, a canoe and a rowboat for getting out on the lake. Plenty of hiking trails in the area will also help burn off some suds calories.

We too will take care of you on the food front. Each morning you’ll start your day with our full Maine Comfort breakfast featuring a sweet entrée, savory entrée and eggs to order. We bake our own breakfast breads and muffins. The protein served with breakfast, whether, bacon, sausage or regional country sausages, come from local Maine producers. And if you tire of pub food for dinner, we have some of the best pizza in Maine in our Tripp Lake Pizzeria.

Finally, be sure to allot some time to enjoy our spectacular sunsets with complimentary s’mores by the fire pit. It’ll put a nice exclamation point on a fun day of brewery-hopping.